The Leaves are Falling (and a Little Snow Too)

The fine fall weather provides opportunities for some nice riding whether for recreation/exercise or errands/work. Here are tips to encourage your riding and to keep you safe:

To plan for low stress, safe cycling, plan you route with the free, interactive CapitalNYBikeMap – https://albanybicyclecoalition.com/albany_bike_map/

Washington Ave. Flyover – A Call for Change – In fall 2012, the long awaited “Flyover” to route through motor vehicle traffic from Washington Ave. to the Washington Ave. Extension was completed. This and the accompanying series of traffic circles on Fuller Rd. were clearly designed under an “all cars-all the time” philosophy. These means that people on bicycles who want to travel on Washington Ave. and its Extension, on Fuller Rd., on the University at Albany’s “purple path,” and on the Six-Mile Trail must be in the Advanced/Experienced “Strong and Fearless” or “Enthused and confident” 1 percent category.

The following letter calls for the New York State Department of Transportation to revisit this area and to modify it to accommodate people on bicycles.

Here are some earlier rider assessments.

This is to seek your assistance in clarifying safety concerns of the Albany Bicycle Coalition and of people on bicycles who use Washington Ave., Washington Ave. Extension, and Fuller Rd.

Because of our advocacy role in the region, we receive questions and comments about riding conditions. One common area of concern is navigation of the Fuller Rd. traffic circles, the Fuller Rd./Washington Ave. intersections, the Flyover, and bicycle travel on Washington Ave. Extension. As you are aware, fear of riding in traffic is the single, major impediment to bicycle travel. This is nowhere more apparent than in those spaces where motor vehicle movement was the paramount design feature.
In response to these concerns, we formed a study group to develop questions and recommendations about these specific roadways. We are at the point where we need advice from you or members of your staff on what are feasible treatments for this Washington Ave.-Fuller Rd. area.

I am asking that you arrange for our group to meet with you or staff for a learning session where we can articulate our concerns and our ideas. I am enclosing some specific ideas that result from our site visits and deliberations. Because several of our members work during the day, it would be helpful to have such a meeting at the end of or after the businesses day. This meeting could be augmented by site visit(s).

We look forward to hearing from you.

The Albany Bicycle Coalition held the Ride of Silence on Wednesday, May 17. Twenty-six riders plus an Albany Police Department escort visited four ghost bike sites in the City of Albany and Colonie – Jose Perez, Diva De Loayza, Nicholas Ricicihi, and Paul Merges.  We started from the Boat Launch area, Albany Corning Preserve and W. Capitol Park on Washington Ave. At each site, we placed fresh flowers. 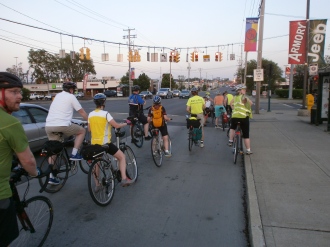 At Diva De Loayza’s ghost bike site (corner of Western Ave., Homestead we read the names of those who have been killed since 2000 while riding their bicycles. We were honored to hear from family members of three of the fallen riders.

ABC’s using the 10-Year Anniversary logo since we are on record as having conducted the Albany ROS each year for that period.  Going back those 10 years from this year’s ride date (5/17), we have lost John J. Cummings (1/27/16), Robert Agne, Stephen Nolan, Brian Bailey, Matthew Ratelle, and Paul J. Merges (11/24/12).  That’s 1 every 20 months.  Four of the six died by virtue of bad behavior by people in cars.  See for complete annotated list and photos at – https://albanybicyclecoalition.com/2017/05/01/ride-of-silence/

This year, thanks to Alert Rider Anthony, we had tags to give to those who saw our ride. Each tag had the ROS logo and a few words on the rationale for the ride.

Filed under Activisim, Ride of Silence 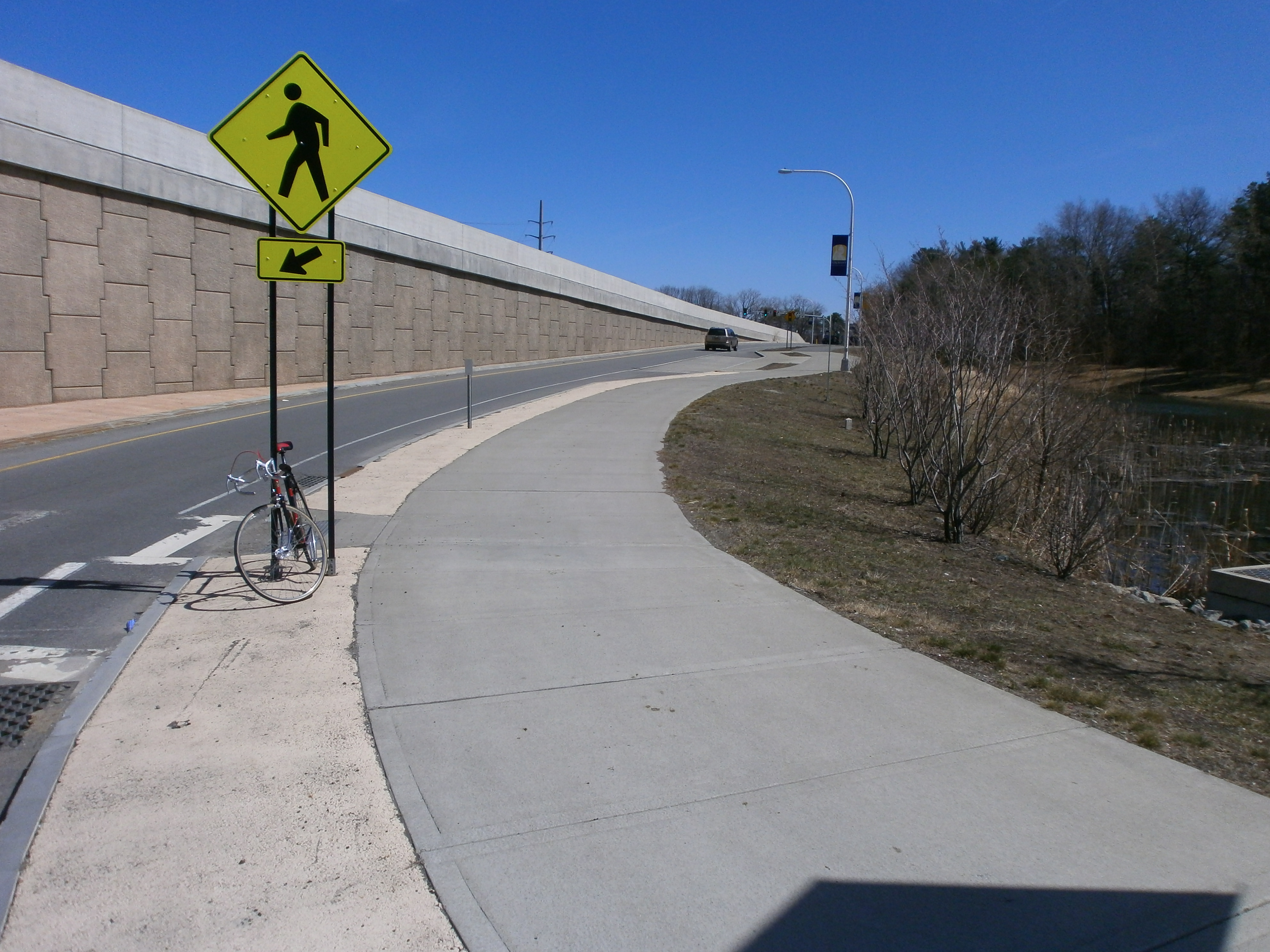 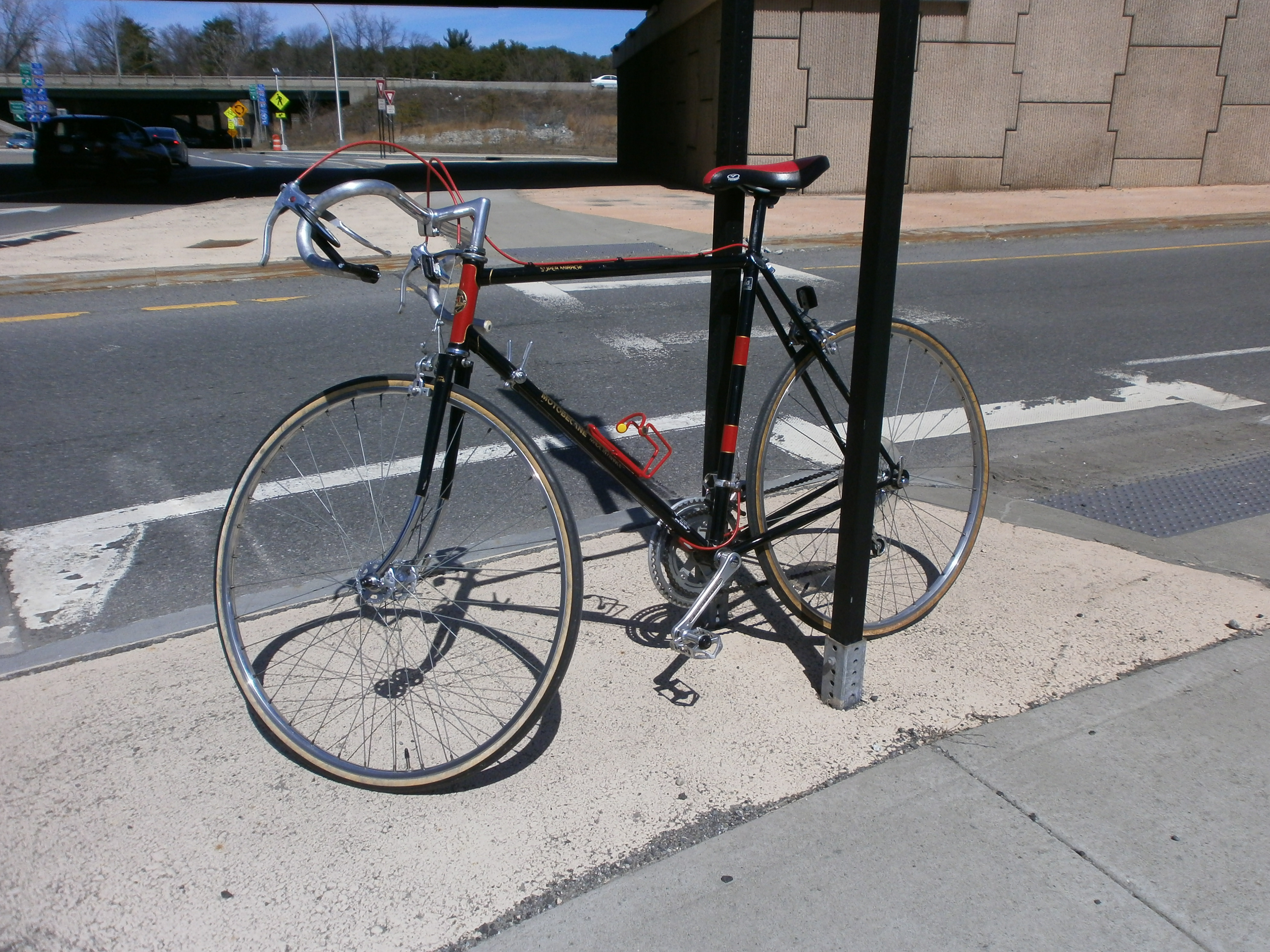 The recent reduction in speed limits on Washington Ave. from Brevator to Fuller Rd. (from 40 to 30 mph) and from Fuller to Rt. 155/Karner Rd. (from 55 to 45) invites immediate reconsideration of the street for use by people on bicycles and for increased safety for all road users. Opening almost 4 miles on Washington Ave. for all users would provide a major commuter and recreational route and would connect the City of Albany to Schenectady and the suburbs with benefits to all. Specifically for people on bicycles, a traffic-calmed Washington Ave. would connect to the Six Mile Waterworks Park trail (and thence to Lincoln Ave./Rapp Rd. and then to Central Ave.) allowing riders to bypass the dangerous Wolf Rd. – Central Ave. area.

To support this approach, we need only note that, although the official speed is now lower, the configuration of the road and the clear message it sends to people in cars is – 40, 45, 50, 55, 60 mph – it’s all good. The entire Albany Police Department could not “police” speeders on Washington Ave. The simple solution is to abandon this configuration of wide lanes with negligible build up or greenery near the roadway, wide shoulders, and 4 lanes. We can send a “complete streets message” by taking advantage of these wide shoulders and extra wide motor vehicle travel lanes to provide 11-foot travel lanes and bicycle lanes on each side from Manning Blvd. to 155/Karner Rd..

A positive feature of Washington Ave. is that it lies under only one jurisdiction – the City of Albany – and is not a New York State numbered route. This means that it is unnecessary to navigate many levels of government to make these changes.

Another aspect of Washington Ave. is the “trail to nowhere” that starts on the sidewalk at the Fuller Rd. underpass/traffic circle on the south side of Washington Ave. (2.4 miles from Manning Blvd.). This multi-use path runs to an abrupt end at the Collin’s Circle entrance to the University at Albany. On its way there, the multi-use path crosses one campus access road (W. University Dr.) with no bicycle accommodations but with pedestrian crossing signals. (With Albany’s “right turn on red after pause ’rule’,” all these University at Albany entries are high-risk crossings.)

There is unencumbered real estate for continuation of this path from Collins Circle to the New York State Harriman Campus western border near the traffic lights controlling access to the office complex at 1365-1367-1375 Washington Ave. (3.8 miles from the start of the multiuse path at Fuller Rd.). Possibly, all that is needed is straightforward signaled crossover for pedestrians and for people on bicycles (to switch between the multi-use path and the bicycle lanes). 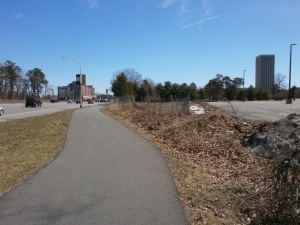 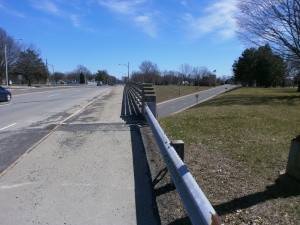 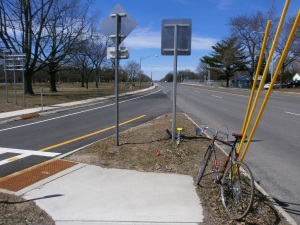 Everyone knows the “ABC Quick Check” – Air (tread or sidewall damage), brakes (pads and cables adjusted), Cranks (loose?)/Chain (lubed?)/Cassette (worn?), and QUICK Releases (both wheels and brakes). The ABC Quick Check can come in many variations, but the preceding is pretty much it.

But time passes, wear occurs, the mind wanders, the B-12 wears off, etc.

Standing around one day, a fortunate glance showed that the “A” in “A,B,C” was totally overlooked when it came to the rear tire. In two places, the tread was worn through and cracked with the tire casing fabric showing through. YIKES! In the case of this particular bicycle, there was not even the excuse of fenders blocking view of the tread…