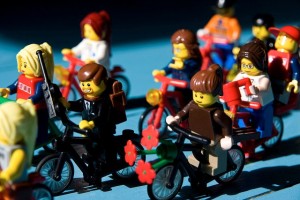 This past Friday, May 25, 2012, Cynthia, Sharon, Jim, Bruce, David, and Gus joined up for a “no hills” urban bicycle ride on a beautiful late spring evening.  We rode about 6 miles at a relaxed pace with a route that included Lark, Central, Washington, Western, S. Lake, New Scotland, Academy, Heldeberg, Sycamore, New Scotland (again), Maple Wood, Fair View, Partridge, Clinton Robin, Central, and Henry Johnson ending up back at the Monument in Washington Park.  With the coming 3-day weekend, the 5:30 motor vehicle traffic was only moderate and the Park was not the usual “rush hour” bedlam.   A good time was had by all.

Critical Mass last week was just the beginning of a much longer ride. We started at the monument and rode around Washington park with a four-year-old in lead. His dad was riding a big bike that kept getting glances and cheers from kids all over the park. Once, we exited the park we headed up some side streets towards UAlbany. We ended up turning down Ontario, then back on to Western heading down to Lark. All along the way we drew looks and cheers from pedestrians, it was great. On Lark we lost a few riders, but it a group of seven continued on. From Lark we went on a sharrow tour, down Delaware up New Scotland, before heading back towards Western, before ending Critical Mass at Dunkin Donuts on Madison.
That was just the ten miler beginning.
We relaxed and chatted at Dunkin Donuts for a few, while waiting for another rider to join us on, a Full Moon Ride. Once, the five of us were ready off we went down to the bike trail, heading towards Troy. Downtown near the river was busy as heck as live music and fireworks went off. Once, we left the crowds behind the moon was the main event. The harvest moon lit up the sky, and it was an awesome site. The weather was perfect as we rode to Troy.
Once in Troy, we headed to Brown’s for some dinner and relaxation. Little did we know that this was just phase two of the ride.
We hung out at Brown’s for awhile, eating good food, when the conversation came up, “Do we want to just go back the way we came or take the scenic route?” Everyone agreed to take the scenic route up the  rail trail. The rail trail was very cool and we got to go through 3 tunnels which were slightly creepy. This part of the ride was interrupted by a flat tire. Once, the tube was changed out off we went. We took the rail trail to Latham, where we left it before it hit GE. We hopped onto another bike trail near British American Blvd to Sand Creek, then down a side rode to cross over Central. From there we headed towards the dump and hopped on another bike trail that let us out onto Fuller road near the Pine Bush. We took Fuller to Western Ave, which was where the ride finally broke up, the four night riders going our separate ways.
Overall, it was a great ride, and I had no idea half the bike paths we went on. One, I speak to the ride leader, I will update with the names since it was late and I can’t remember. It was my longest ride at 42.3 miles and it was awesome.