What’s Going on With Madison Ave.? 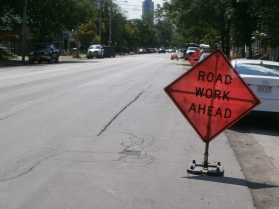 For the past several weeks and probably for several more, there has been and will be extensive street work on Madison Ave. You’ll see a lot of traffic cones, heavy equipment, workers in hard hats, dust and dirt, pipes, re-paved strips, and so on. This is in preparation for the final phase of the Madison Avenue Traffic Calming project – Partridge St. to Lark St. This “below surface work” must be done before the repaving and re-striping of the roadway. It appears that these last phases will be done in this fall with installation of traffic control signals to follow.

Completion will mean 1-1/2 miles of sane motor vehicle traffic with left turn lanes, cross walks, and new traffic control devices and signs. It will also mean that people in cars can go no faster than the car ahead of them – hopefully, the posted 30 mph or less. No more crazy passing on the right or using the parking lane as a through lane.

The continuation of the bicycle lanes from Allen-Partridge to Lark St. will provide people on bicycles with a smooth, safe ride Pine Hills Neighborhood Association to “downtown.”

It remains for people who want better bicycle facilities in the City of Albany (this would mean YOU) to start pushing for continuing the lanes past Manning Blvd. to connect to the current bicycle lanes in Guilderland and then on to Crosse Gates. Accompanying this must be mapping of cross town and downtown routes from Lark St./Delaware Ave. For suggested routes, see the BikeAlbanyMap.

None of this will happen unless there is a big and sustained push from those who want a livable Albany.