They Are Here – Bicycle Lanes on Madison Ave.!

They Are Here – Bicycle Lanes on Madison Ave.! 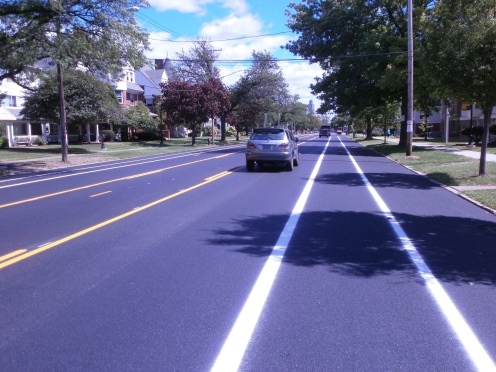 Finally – workers are today, Monday, 8/22/16, putting the finishing touches on the new road layout on Madison Ave. from Partridge St. to Allen St.

Not surprisingly, when people in cars complete the new one-travel lane segment delimited by the center turn lane on one side and the bicycle lanes and parking lanes on the other, they continue in a “traffic-calmed” single file. How easy it was! Attention Naysayers! – Before the job is 100 percent completed, people have learned how to drive in it.

Moreover, what a dream to ride one’s bicycle.

Credit for this success lies largely with Virginia Hammer, president of the Pine Hills Neighborhood Association, whose diligence, persistence, initiative, and presence at many events guided this new era for the City of Albany into fruition. We need also recognize all those who attended meetings, carried banners and posters, wrote letters, and signed petitions to support the effort to calm Madison Ave. for the benefit of all.

Protected Bicycle Lanes at Risk on Madison Ave. – After a 10-year effort by citizen groups, the City of Albany is designing and constructing a “road diet” along Madison Ave. from S. Allen St. to Lark St. While the project reduces the number of motor vehicle travel lanes, while improving to some degree bicycle accommodations, it still maintains Madison Ave. as a car-priority street.

The City of Albany is holding a Public Meeting on Madison Ave. Traffic Calming and Protected Bicycle Lanes on Wednesday, March 9, 6:30-7:30 PM at the College of St. Rose, Lally School of Education, 1009 Madison Ave. 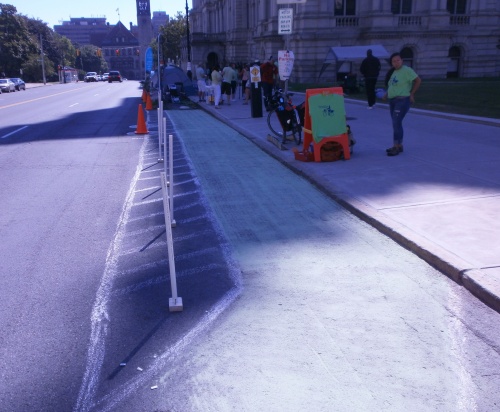 The City now has two alternatives under consideration. The purpose of the meeting is to review these concepts and trade-offs for the two feasible alternatives. The Allen St.-to-Lark St. project is to be done in three phases, Allen to Partridge Sts. being the first. 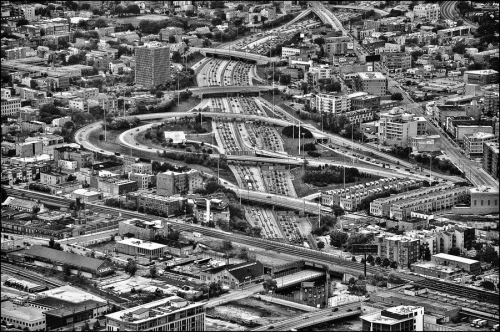 #1.    Albany’s Past and Present ~ Bicycle Tour of the South End Bikeway Link and Area

Tour the South End Bikeway Link and some interesting historic sites. In October, the Albany County Helderberg-Hudson Rail Trail will connect Delmar with the South Albany – reaching statewide via the Corning Preserve Bike Path, the Mohawk-Hudson Bike-Hike Trail, and the Erie and Champlain Canalways. Except for a 1.5-mile gap in the south end. How will all the cyclists/walkers, neighbors/tourists, and south enders/suburbanites connect to this network?

Sometimes I Take the Sidewalk

Despite all of this, sometimes I take the sidewalk. Very rarely and only on the arterial streets when there is no way around them. This is the type of Chicago street where you’ll find the Targets and the McDonalds. Four lanes, two in each direction, no shoulder, definitely no bike lane, high speeds, and ginormous potholes. Meanwhile, the pedestrian-free sidewalks beckon. For these reasons, if I absolutely cannot avoid taking these streets, I usually ride on their sidewalks.

The most recent sidewalk expedition was on Thursday night, as my destination was on an arterial street and it’s the only way to get across the highway and river dividing the east and west sides. On top of everything, it was dark and raining. After studying Google maps in preparation for the trip, I decided that I would take side streets as far as possible and then hop on the sidewalk. 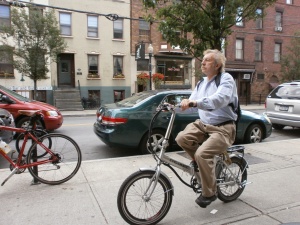 I am more interested in getting from point A to point B safely than in sending a message or exuding street cred (which is hard to exude on an Omafiets, anyway). 98% of the time it is safer to ride in the street, and even when I decide to take the sidewalk, it is only safer if I follow these rules:

This particular ride was more stressful and took longer than normal rides in the street because I had to slow and stop at so many intersections. Although I passed no pedestrians, I passed a few bikes – a couple on the sidewalk and a couple in the street. Did I feel a little sheepish when I passed the street riders? Sure, but not sheepish enough to throw myself in a situation where I did not feel safe.

The problem is that the city traffic design completely disregards bikes at the most dangerous areas, such as crossing rivers and highways. (Read about this problem in more detail at Chicago Bike Blog, where the author eventually decides to take arterial street sidewalks for a particular route with her son). So for those who are passionately against sidewalk riding under any circumstances, I respect that, but don’t hate the player, hate the game.

*NOTES: New York State appears to be typical in that the Vehicle and Traffic Law 5 does not regulate sidewalk bicycling. It appears that the General Municipal Law (Section 180) 6  states that NY municipalities can regulate bike riding on sidewalks. They cannot require that bicyclists use a sidewalk instead of a public roadway, but they can impose limits to sidewalk bicycling. ALBANY CODE – § 359-4 Riding on sidewalks prohibited; exceptions. – No person shall ride any bicycle, tricycle, velocipede or other vehicle of propulsion on or over any footpath in any of the parks, or on or over any of the sidewalks of any of the streets or avenues in this City, except if it is to go into a yard, lot or building; provided, however, that the foregoing provision of this section shall not apply to children under 10 years of age; and provided further that this section shall not be so construed as to prohibit the riding of any bicycle, tricycle or similar vehicle upon or over the unpaved portion of the sidewalk of any such street or streets outside of the thickly settled part of the City as shall be designated in writing by the Mayor.  Every designation so made as aforesaid shall be filed with the Chief of Police and may be revoked by the Mayor at any time in his discretion. 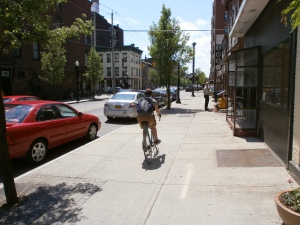 Join other stakeholders to discuss the recreational and economic benefits “the link” offers to connect local residents and neighboring communities. Together, our voices can be heard to build a safer path to the Hudson River/downtown Albany. 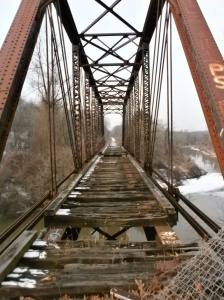 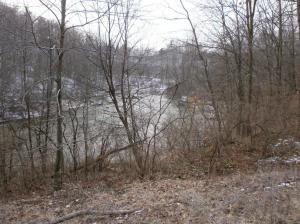 By mid October, the 128-year-old Albany Susquehanna coal hauling rail line re-opens as a multi-use path for people on bicycles, walking, or running. It will stretch 9.3 scenic miles from Albany’s Port at Rt. 32/South Pearl St through Delmar to the Village of Voorheesville. While from Western New York, the 360-mile Erie Canalway/Mohawk-Hudson Bike Hike Trail abruptly stops at Albany’s waterfront Corning Preserve. Between the trails lay a 1.5-mile gap — one that forces cyclists onto rushing car commuters on Route 32 and neighborhood streets that are lacking any facilities for people on bicycles except for a few shared lane markings on S. Pearl St. 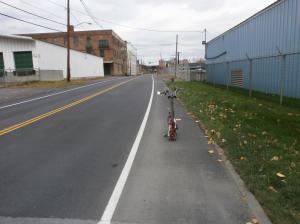