Bicycle Lanes in the City of Albany

UPDATE: 10-10-19 and 6-27-20 ~ At the time of the original post, the bike boxes were outlined and had the required bicycle-with-rider symbol but were not painted green as is the common practice. Photos taken 10-8-19 show that the boxes remain uncolored – note car encroaching on and stopped in the bike box (no people on bicycles present at the time). 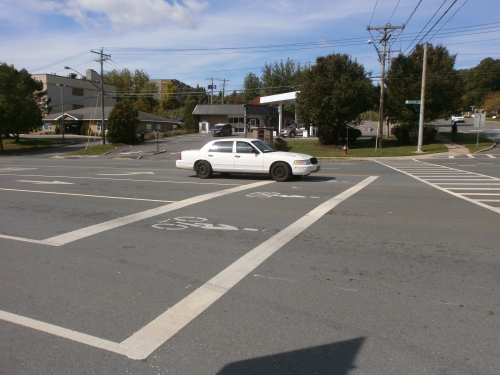 The National Association of City Transportation Officials recommends that “colored pavement should be used as a background color within the bike box to encourage compliance by motorists.” Observations are that “ … the percentage of motorists that encroached on the stop line decreased significantly with the implementation of the skeleton [uncolored] bicycle box.” See: https://nacto.org/publication/urban-bikeway-design-guide/intersection-treatments/bike-boxes/

If you are unfamiliar with “bike boxes,” view “How to use a Bike Box” by Streetfilms. http://www.streetfilms.org/how-to-use-a-bike-box/ Or, read the instructions. The basic concept is pretty clear – if you are on your bicycle, traveling in the bicycle lane, and need to turn left (in this case, east bound off Pearl St. onto northbound Union St.), the petrovehicles are stopped before the green box allowing you to safely ride into the box ahead of the cars and make your left turn as soon as the traffic light indicates.

Here are views of all three Bike Boxes at the Shaker Rd./Northern Blvd. intersection. 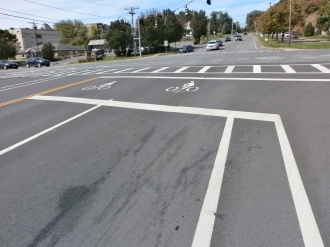 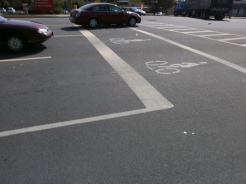 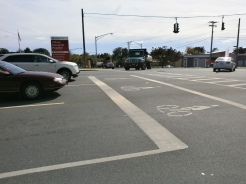 As part of the Northern Blvd.-Van Rensselaer/Rt. 377 bicycle lane network, an additional 0.3 miles of buffered lanes are now open on Shaker Rd. (It’s “Albany-Shaker Rd.” in the Town of Colonie and “Shaker Rd.” and then Loudinville Rd. in Albany. 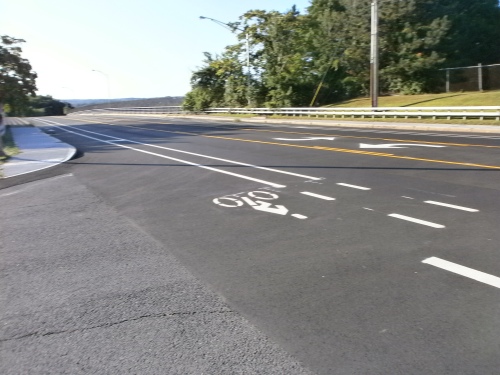 The 6 ft. lanes have a 3-ft painted buffer but on the driving lane side. These facilitate the ride down (or up) the hill by Memorial Hospital to and from Broadway. The lanes also should reduce petrovehicles speeds on this busy route. Eventually the lanes will continue the additional 0.5 miles to Broadway. 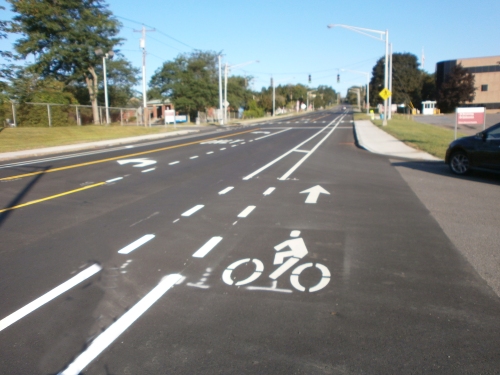 Below is an inventory of installed bicycle lanes in the City of Albany. Please report any change/corrections to lorenzworden@gmail.com

Bicycle Network – The bicycle lane-to-lane connections are as follows:

Albany Bicycle Master Plan – The City of Albany approved its Bicycle Master Plan in December 2009. It called for a 20-year completion period as follows: “This bicycle master plan identifies a bikeway network to be phased in over the next 20 years,” (SOURCE: Pg. ES3, https://albany2030.org/files/City%20of%20Albany%20Bicycle%20Master%20Plan.pdf ) In the first 10 years, the city installed 4.5 miles of bicycle lanes for an average of 0.45 per year. At this rate, the City of Albany will have 9.0 miles of bicycle lanes at the end of the 20-years.

By comparison, the City of Troy’s Uncle Sam Trail is 6.3 miles in a combination of shared lanes, cycle tracks, bicycle lanes, and off-road multiuse paths. Troy plans to close the 0.8-mile gap for the “Hudson River Promenade,” now under construction, in 2021.

2 responses to “Bicycle Lanes in the City of Albany”