The first photo shows the start of the new lanes (as yet uncompleted) at Northern Blvd. 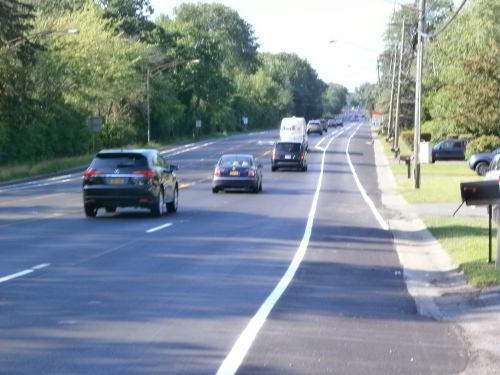 NYSDOT is completing this recent project in consultation with the City of Albany on project scope. It builds on the 2015 bicycle lanes/traffic calming installation on Northern Blvd. The city will expand the bicycle lane project on Northern Blvd from the I-90 bridge north toward Albany-Shaker Road later this summer. Notably the lane treatment at the southern end of Northern Blvd. is one of the best designs you will find in the region. Note the bottom photo with a nice buffer.

Those who use the BikeAlbanyMap and Parks & Trails New York Erie Canalway Trail map will note that one can ride the Mohawk-Hudson Bike-Hike Trail from Rotterdam Junction (with a few on-street portions in Schenectady, Cohoes, and Watervaliet), leave the MHBHT at the (hidden and bumpy) Schuyler Flats Trail near Passano Paints and the I-787 underpass at Broadway and 4th Sts. to Schuyler flats, go a short half mile south on Broadway, crawl up the hill through Albany Rural Cemetery, join the above described new bicycle lanes on Van Rensselaer/Rt. 377, enjoy the “calmed” Northern Blvd. to McCrossin and Thornton Sts. at the old Livingston Middle School, and then wind through a quiet residential neighborhood to the bicycle lanes on Clinton Ave.