“Towpath Tuesday” Pedals Off for 2017

After being rained out on its planned inaugural 2017 ride, the Bike Barn’s Meetup Group met on 4/11 for the “Towpath Tuesday’s” classic ride. The group met on Van Schaik Island Park and then headed north on the multiuse path toward Waterford.

We skirted the Barge Canal and then cut over to the Old Champlain Canal Trail and towpath. This beautiful, quiet path along original canal features ends at the old Lock#4 just across the canal from the Waterford Historical Society. (One can walk to the Society from this spot.)

Here the group paused for socializing and looking out over the expanse of the Mohawk River /Barge Canal toward Cohoes with views of the new Cohoes-Waterford Rt 32 bridge. 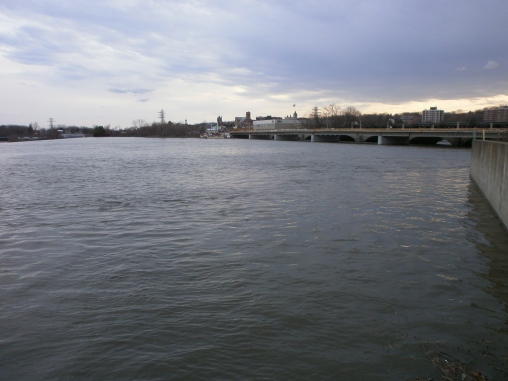 From here, it was back through Waterford, over the gates at Barge Canal lock #2 and then north along the Champlain Canal Trail. This area is filled with remnants and sites of the canal including the Weighlock and Lock #5. We turned around at the landfill at Momentive. (For those seeking an added reward, the trail continues on to Upper Newton Road in Mechanicsville. See https://albanybicyclecoalition.com/2016/08/04/the-black-bridge-isnt/ and https://albanybicyclecoalition.com/2016/08/04/the-black-bridge-isnt/ .

As darkness approached, we rode back along the canal, through Waterford, behind the Visitors Center and over the Bridge to Peoples Island and back to the Park. A highlight of this route is the new “pedestrian priority” traffic signals on the ever-busy Delaware Ave./Ontario St. (Rt 470 – Troy’s 112th St. ) intersection, Rather than making pedestrians wait for unending “all cars-all the time” light cycles, the walk light comes on as soon as the light changes from its current setting. Wouldn’t these be great on Central (Death) Ave.!

A sad note at both the beginning and end of the trip was the removal of a copse of trees and the view of the Hudson replaced by an ugly apartment/condo complex – yuck!

Meetup group members receive a 5% store discount off regularly priced merchandise at Bike Barn Cycling & Fitness. Just mention that you are a Meetup.com member of this group. Riders can also have their bikes checked over at no charge up to 30 minutes prior to any ride. As always, helmets are required.

Here are some details:

On Empire State Trail Day, you’ll join a team led by experienced advocates. As you arrive, we’ll introduce you to your team members and review the day’s schedule over coffee and light refreshments. Then it’s off to make your voice heard. Team leaders will assist you in making the case for the Empire State Trail vision and funding.  There is no cost to participate, but registration is required. Prior to Empire State Trail Day we will email you information and talking points.   ++++++

Share your #NYTrailTales Lending your voice in support of the Empire State Trail vision will help ensure that it become a reality. That’s why PTNY is introducing #NYTrailTales, a movement calling for all trail users and lovers to tell us how they use the state’s trails.

What is your favorite trail activity? What trail plans do you have for the coming year? Where will you go when new sections of the Empire State Trail are done? Share your #NYTrailTales, or post your trail story to social media and include the hashtag #NYTrailTales. Your enthusiasm can make a difference. You’ll also be entered to win some cool Erie Canalway Trail bike swag!

Want to do more? – In addition to sharing your #NYTrailTales story, expressing your support to your state legislator in a phone call or letter, or sending a letter to your local paper will help to ensure that funding for the Empire State Trail is included in the final state budget.  PTNY will be providing virtual advocacy resources in the coming weeks.