Here is a nice day ride from Albany to Sunny Waterford. From Albany Bicycle Coalition HQ in Pine Hills, it’s 4.4 miles to the Boat Launch/Row Center at the Corning Riverfront Park via the Conventional Bicycle Lanes on Clinton Ave., Broadway, and Erie St. (Can’t wait for the new entry to the Mohawk-Hudson Bike-Hike Trail at Colonie and Quay Sts. so one can avoid the crazy exit ramp from I-787.)

Starting from this nice view of the Hudson, you have 4.5 miles from the Row Center to the car park/fishing spot in Watervaliet where the tunnel leads under a roaring I-787 to the pretty calm streets of the city.

Take a right onto Broadway. A recommended detour of a couple blocks (take the first left you can) will result in the best glazed doughnuts in the area from the Schuyler Bakery (637 3rd Ave. – open Tue – Sat) (Coffee is a Stewart’s – four or five doors south of the bakery.) 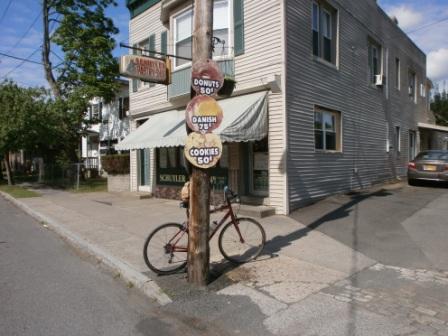 You can take your coffee and goodies down Broadway to the memorial park behind McDonald’s or save them for Green Island – see below.

Pay attention, as there are several challenging intersections and sometimes-heavy traffic on Broadway. As you get near the north end of Watervaliet at 23rd St., follow the Mohawk-Hudson Bike-Hike Trail straight ahead and not to the right onto NY Bike Route 9. Caution advised. Simply follow the MHBHT signs until you enter the Sovereign and Independent Nation of Green Island (which is green but not an island) for a rest stop at the Heatly School or the GIG (“Green Island Gazebo”) Park (with views of N. Troy and the Federal lock [it’s federal because its tidal]) (3.3 miles and 7.7 miles from the Row Center).

Now, here’s the well-kept secret – just past the school and park on Hudson Ave., the route turns left onto Tibbits Ave. and passes the large Paine Street Park on your left. Take the first right turn after the park and leave the MHBHT to go on Cannon St. Ignore the road closed signs as you pass between the gigantic concrete barriers and you’ll be on gravel but only for 1/10 mile, so don’t despair. Travel on and you are at the non-black Black Bridge (1.2 miles from the Green Island School and 8.7 miles from the Row Center).

The bridge takes you across the confluence of the Mohawk and Hudson – stop and lean on the rail to enjoy the sight (on both sides) before you enter Van Schaick Island, Cohoes. (Cannon St. now becomes Railroad Dr. and later Delaware Ave. and finally Second St.)

You are now on a paved “multi use” path which will take you to Peebles Island and then again over the Mohawk to Broad St. in Waterford. While on the path, be mindful of the several intersections especially the intersection with Van Schaick Ave. that has no advance warning or stop signs and that of Ontario St., Rt. 470 where people in cars will show no mercy and there is a busy Cumberland Farms “quick stop.” (Be sure to contrast the Van Schaick House on your left with the monstrous development on the right.)

Be courteous to the walkers and joggers and verbally announce your presence when you overtake and with a “thank you” especially if they step aside to let you pass.

As you cross from Peebles Island into Waterford, see our remaining Dutch replica ship, the “Onrust,” to the right and the Canal Harbor. At Broad St., you’re about 12 miles and 1.5 hours from the Corning Riverfront Park.

You can spend days in Waterford exploring the old and new locks and other structures of the Erie, Champlain, and NYS Barge canals. The Waterford Historical Museum is located in the 1830 Hugh White Homestead just east of Saratoga St. Rt. 32 as it heads south to Cohoes. However, all this is another adventure.

Turning left/west onto Broad St., from Second St. and passing four streets on your right, you’ll come to the old Champlain Canal.

The Champlain Canal Trail at Waterford

If you’re on 700X25 tires, lock up and take a walk up the canal towpath. If you are on wider tires, take the towpath past old Lock #5 about 1.5 miles to the landfill and Momentive Performance Materials industrial complex. The northerly path then continues on to Mechanicville … but more on that later…

Heading back south to Waterford, continue directly across Broad St. to join up with the bicycle/walking paths for some easy touring along the canal with a visit to the Harbor Visitor Center (scene of the annual tugboat rally). Again, you can spend days exploring.

One response to “The Black Bridge Isn’t”