About Daniel I. Patterson

Tomorrow at 12 PM, road bike racers from all over the globe will begin a grueling 124 mile race around upstate New York. The invitational race boasts over fifteen grand in prize money. Expect. Pure. Chaos.

It’s not all about the race.

More Here, Tour of the Battenkill

Today, amateur racers battle for their place on the podium. I played the official’s role. Told racers when they crossed the center line. Wrote down their number as they were dropped from the peloton. There were tons of flats. One older gentleman had two flats and a tire around his neck. He wasn’t in our group so we didn’t stop.

The course is filled with steep climbs, sand pits, stones the size of fists, and high winds. It will be great to see the invitational race tomorrow. My camera’s ready, is yours?

Special Thanks to the Following:

University at Albany Office of Sustainability

Road marshals are needed at this year’s Tour of the Battenkill. The race takes place this weekend, April 15th and 16th in upstate New York. Many positions need to be filled. You don’t need to be certified to help. Marshaling is a voluntary role that will get you up close in person to the racers during the competition.

Marshals are a vital part of every bicycle road race. They help ensure the safety of the event by keeping spectators, recreational cyclists, cars, children, and stray animals out of the way of the competitors, race caravan and official vehicles. A more complete description can be seen here from procyclingtour.com.

This is is a great opportunity to see the action of one race from the Great American Cycling Series. Racers from all over the world will be competing for the title of Battenkill. I’ve heard a British race team is to arrive on Friday for the event. It’s an international race, want to help?

America’s largest one-day Pro/Am cycling race. Racers compete over 62 miles of rolling terrain on both dirt and paved roads as they travel through the world famous Battenkill Valley. Set in early spring, the race starts and finishes in the scenic village of Cambridge, New York and courses through covered bridges, family farms, and rural villages along the many challenging backcountry roads that traverse Southern Washington County, New York.

The 2011 edition played host to over 2,500 amateur and professional cyclists from throughout North America and dozens of nations worldwide. From Battenkill website.

Did we mention three time Tour de France winner, Greg Lemond will be there?

Haven’t Met Us Yet?

Then come meet us at L.L. Bean’s Bike and Boat Weekend.

The event will take place Friday, April 27th from 10:00am to 9:30pm at the Colonie Center Mall. We will be meeting and greeting, talking about our 2012 Bike EXPO and giving valuable information on cycling in the Capital District. To talk about riding safely, a few of our League of American Bicyclists certified bicycle safety instructors will be there to talk to you. See you at L.L. Bean!

Did you hear? There is a Bike EXPO taking place in Albany on May 6th? And it’s FREE!

Wow, am I excited!

There is going to be so much to do. You can meet local riders, shops, and teams; participate in a ride, win prizes, or get your bike checked while you gobble down great food! I mean really great food! There will be two rides.

One ride will show off Albany’s in-city bicycle amenities and the other family friendly ride will be lead by League of American Cyclists!

I know there will be lots of bikes to check out, so make sure you bring your best ride. I’ll be on my Greg Lemond Zurich!

The event will take place on May 6th between the hours of 10am and 4pm at the Washington Park Lakehouse. Lets hope for sunshine! 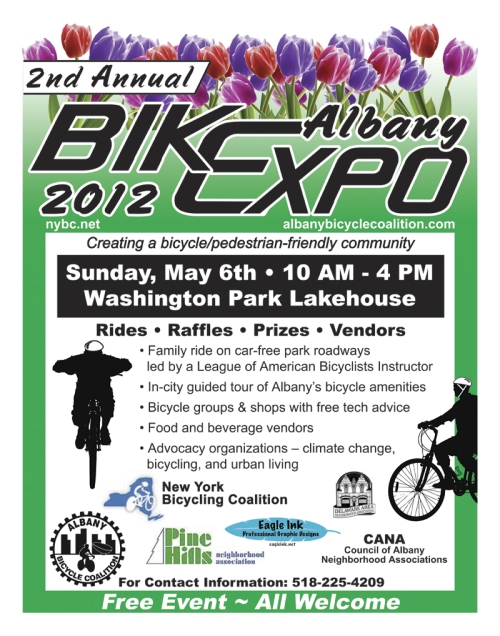