A Simple Solution to an Elegant Problem?

A frequent discussion item is the perceived risk for people on bicycles who are forced to ride though hellish intersections. These include, but certainly are not limited to: Central Ave./Wolf Rd., Western Ave./I-87/Fuller Rd., the Fuller Rd. “flyover” on Washington Ave., and Central Ave./Everett Rd.

In 2014 in a similar situation, the Village of Menands with New York State Department of Transportation oversight, installed a short stretch of bicycle lanes on Rt. 32/Broadway at the Rt. 378/I-787 entrance/exit ramps. (This was an earlier component of an overall re-do Rt. 32/Broadway in the village. Notably, much of this was reduction in motor vehicle travel lanes from four to two – as in the stretch in front of River View Center [Montgomery-Wards] leading north over the railway tracks into the village.)

The first photo (above) looks north just past the soon-to-closed Price Chopper. The iron fence in the left of the photo is Albany Rural’s with CorrCraft and Albany Steel following and the Schuyler Motel on the right with its sign between the second and third utility poles. The second photo (below) looks south with the Price Chopper “plaza” to the right and the Rt. 378 overpass in the distance. 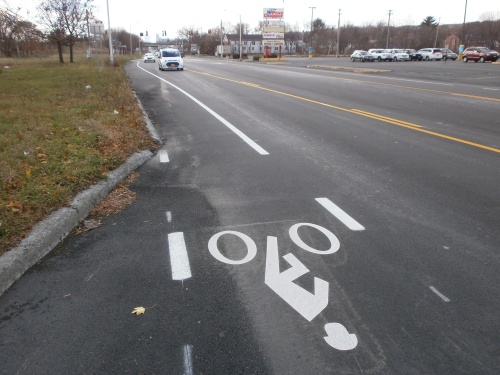 At the time this was done, NYSDOT stated: “The reduction in the number of travel lanes from four to two with a two-way left-turn median in the center … reduces the frequency of rear-end accidents. We understand . . . that there are not left-turning opportunities at all locations where the median is provided, however it is important that the thru travel lanes have a consistent alignment. There may be a minor reduction in the efficiency of the operation of Route 32 but the safety benefits are significant.”

So … is it possible that low-budget projects (as the above) could provide visible bicycle facilities to guide both people in cars and on bicycles through troublesome intersections? This could be done without a complete (and expensive) re-do of the entire street with full-scale bicycle lanes. If you’ve ridden the section in Menands described above or Madison Ave./Main Ave. intersection, you might have an idea on how this might work successfully elsewhere.