The legend is that in late Middle Ages in the Lombardy District of Central Italy (see map) in the hill above Lake Cuomo, Our Lady appeared to Count Ghisallo who was being robbed by highway men. He was praying for help when he saw the apparition. Count Ghisallo ran to it and was miraculously saved.  An alternative legend is that Count Ghisallo was near the village of Magréglio when attacked. Spotting an image of the Virgin Mary in a roadside shrine, he broke away from his attackers and ran to it. There he took refuge, pled for Our Lady‘s protection – and miraculously the vision of the Blessed Virgin scared off the highwaymen. In gratitude, the count started praying to her for protection and told the story to anyone who would listen. He instituted a roadside shrine with flowers and candles. 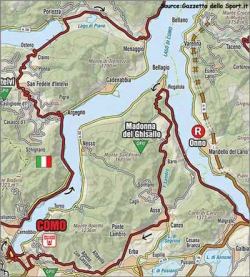 The Virgin Mary under this title was originally prayed to for the protection of local travelers. As the story gained credibility among the locals, the count eventually replaced the makeshift shrine with a small chapel he funded. Through the years the legend grew. Once the chapel was built, clergy were assigned officially to maintain it. The patronage of Our Lady of Ghisallo evolved from humble foot travelers to recreational bicyclists. These recreational cyclists passed the idea of the protection from robbers to bicycle racers looking for safety from crashes and injury. They must have documented these cases (i.e., official miracles ascribed the intersession of the Madonna del Ghisallo) because Pope Pius XII established Our Lady of Ghisallo as the patroness of cyclists on October 13, 1949. This was at the request of Father Ermelindo Vigano, pastor at the shrine. There is an eternal flame that burns in memory of the cyclists who are no longer with us, and services are held each Christmas Eve and the Feast of All Souls to commemorate them.

The chapel is fitting because the Giro di Lombardia (Tour of Lombardy), bicycle race goes past the shrine built by Count Ghisallo at the top of the Ghisallo climb (the Passo del Ghisallo). The chapel is the finish line for the annual, one-day classic Giro di Lombardi race, and is a regular feature (once every two or three years) stage route of the Giro d’Italia. The shrine includes a cycling museum and a memorial to cyclists who have died.

The chapel gathered a collection of cycling memorabilia. Bicycle frames, whole bicycles, and jerseys festooned its walls. Over the years, great champions such as Felice Gimondi, Gianni Motta, Francesco Moser, Gino Bartali, Eddy Merckx, Alfredo Binda, Guiseppe Saronni, Mario Cipollini, Gilberto Simoni, and Stefano Garzelli contributed race-worn gear to the chapel. It was believed that one could not be considered a serious champion or potential champion until one donated a jersey or bicycle for display in the chapel. The memorabilia eventually overran the space, and cheapened the spiritual intent of the chapel. In 2000, construction was started 200 yards from the chapel for a Museum of Cycling with the blessing of Pope John Paul II. When the museum was near completion, Pope John Paul′s successor, Pope Benedict XVI, blessed the corner stone on May 31, 2006.

If you are a cyclist or know someone who is, you can purchase a small medal as a reminder of Our Lady’s protection.

See also – Notre Dame des Cyclistes – The chapel of Notre-Dame des Cyclistes is situated in the commune of Labastide-d’Armagnac in Les Landes département in Aquitaine, France. The chapel is all that remains of a 12th-century fortress of the Knights Templar. The Château de Géou was razed by the Black Prince in 1355. It was listed as a monument historique by the French Ministry of Culture on 27 February 1996. – https://en.wikipedia.org/wiki/Notre_Dame_des_Cyclistes

The (Motor)cyclist’s Prayer [SOURCE: http://www.catholic.org/prayers/prayer.php?p=2115] – O, dear Father, I ask for you to watch over me as I ride from Point A to Point B. Help all other motorists to see me clearly and help me to stay out of their way. Bring me back to my family in one-piece dear God, these things I pray. Amen.

Blessing of a Wagon or other Vehicle [SOURCE: http://www.catholic.org/prayers/prayer.php?p=368] – Be gracious, O Lord God, to our prayers and bless this vehicle with Thy right hand. Send Thy holy angels to accompany it that they may keep from all evils those who ride in it; and as once Thou didst grant faith and grace through Thy deacon Philip to the Ethiopian riding in his chariot and reading the word of God, so now show the way of salvation to Thy servants that, always given to good works, they attain to everlasting joys after the vicissitudes of the journey and of this life. Through Christ our Lord. Amen.

(Translated by Most Reverend J. H. Schlarman Bishop of Peoria) 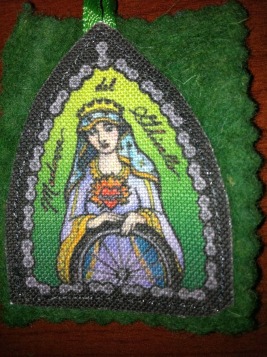 Blessing of the Bicycles – Almighty God, maker of heaven and earth, and of all things visible and invisible, we come to you in prayer and thanksgiving. In a world burdened by motorized transportation and consumption, we give you gracious thanks for the wondrous bicycle, on which we enjoy the goodness and beauty of your creation while improving our fitness and health. We ask you to protect the children who ride or who are learning to ride. We ask you to keep all riders, leisure riders to elite athletes, safe from accidents. We ask you to protect all riders from anger and theft. We ask you to give us skill to ride in all sort of conditions, and to help us forgive those who are negligent and mean. We ask you, in thanksgiving for those who build or repair bicycles, that you will guide them to be diligent and competent in their work. Heavenly Father, be with us now and bless us as we dedicate these bicycles and their use to the preservation of lives to your honor and praise. Grant us faith to know your gracious purpose in all things. Give us joy in them and lead us to use all your gifts, including our bikes, with wisdom, compassion, patience and love. We ask this in the name of the Father, and of the Son, and of the Holy Spirit. Amen.