Albany County hosted an informational meeting for the public on the status of the new Albany County Helderberg-Hudson Rail Trail. The speakers were representatives from the Albany County Executive’s office. Albany Bicycle Coalition members compiled the following notes.

Phase III – Veterans Park, Delmar to S. Pearl St., Albany is nearing completion and will ave a ribbon cutting ceremony in the spring of 2016. Paving is now complete.

Things that held up the opening were shoring up of the creek issues that cost an extra $350,000 and the Delaware Ave. Bridge that took longer than anticipated (see photo).

Minor things still to be completed – Fencing along trail, “gateway entrances” with kiosks, signage, etc. at Booth Rd. and other places. Mileage markers will be installed every half mile.

Parking in Delmar is limited at present (pointed out by members of the public). The county responded that it did not anticipate how many people would drive to the trail; they assumed that in Delmar, users would be walking or biking to the trail. The county will have to look into it.

At S. Pearl St., work is in progress on pedestrian crossing signals.

No garbage cans planned at present, due to extra expense required to cart trash away.

No good Rockefeller Rd. access at this time. They are “looking” at it. Possibly, there could be a winding path from the road down to the path. No new bridge will be built to replace the demolished bridge, as it is too expensive.

A parking lot is planned near the Slingerlands firehouse trailhead. A trailhead will also be at Adams St., Delmar. Both sites will have kiosks and signage.

Common complaints heard included the following: landowner complaining that people are coming on to his land; conditions on the trail itself (e.g., water flooding onto the trail between Rockefeller Rd. and the bridge over the Normanskill); unleashed dogs on the trail; lack of dedicated parking near trail; and one instance where someone saw a motor vehicle on the trail at night in Voorheesville. 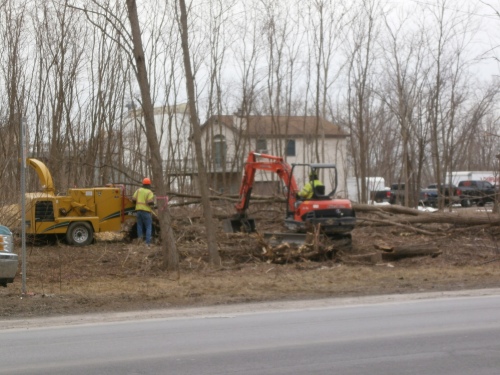 Other things mentioned were that there will be an archeological dig on the south side of the trail on the Albany side (Native American site?). There may be a celebration on July 16, more news to follow. One person asked about any plans for the much-needed South End Bikeway Link to the Corning Preserve/Mohawk-Hudson Bike-Hike Trail. The response was that there isn’t any plan. Note – While the county isn’t taking it on, the City of Albany has Capital District Transportation Committee funding for a feasibility study which is in process according to the City of Albany at the 1/12/16 Capital District Transportation Committee Bicycle and Pedestrian Advisory Committee meeting. One of the county people mentioned that the first meeting is at the end of this month, January.

Did you know there is no law that prohibits motor vehicles from accessing the trail? It has to be enacted at the local level and it hasn’t yet (can’t make this stuff up).

There are no further phases in the pipeline. The railroad still owns the rest of the route going north to Altamont.

Policing – The County said that it is difficult to police the trail. It simply recommended calling 911 to report issues. A Town of Bethlehem representative said that they do conduct some patrols.

Publicity – A county representative said he didn’t think a special publicity campaign is necessary. One person disagreed stating that there are paved bike paths near Albany that he discovered only by accident or via Google Maps.