Bunny on a Bicycle

Three in particular promoted utilitarian use of bicycles – a F. van Buuren & Co. Dutch “city bike,” a Brompton folder, and a set of two “bicycles for a small family” – one fitted with a child seat and the other pulling a tag-along.  Nonetheless, the “people’s choice” awards went to more exotic fair – a Sun Spider AT “fat bike,” a 1930s Schwinn Debutante, and a souped-up Schwinn Stingray.  The fair sponsors provided cash awards for each winning owner. 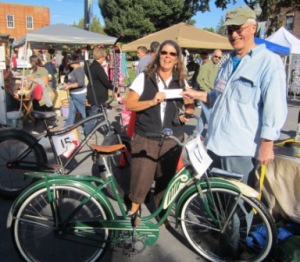 There were 23 entries including tall bikes, hand-made cargo carriers, recumbents, a folder, a vintage Raleigh, a rare Zeus, and a host of others – many of which had received lavish attention by their builders or owners.  Over 85 percent of the ballots distributed to the fair guests were cast to in selecting the three winners as evidence of the crowd’s enthusiastic support for the exhibit.

Filed under Activism, Comings and Goings, Events, Support the Cause