Make Big Bucks With Your Bicycle

Alert reader Frank forwarded an article from the Sierra Club journal under its “green biz” section on people pumping their pedals to provide services. 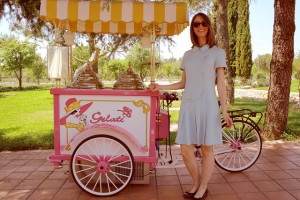 Ruthy Woodring of Pedal People hauls away trash and recyclables in Northampton, Massachusetts (which seems to not have curbside collection).  Her company is a cooperative of 16 workers who collect trash and recyclables for 600 customers.  The longest distance between a customer and the transfer station is 3 miles with a typical route requiring 3 trips averaging 15 to 20 miles on trailers with 300 pound capacity.  Their biggest customer is the city – the Pedal People has 80 trash and recycling bins in the downtown.   Further north, Julien Myette founded a bike-and-trailer moving company, Demenagement Myette, in Montreal and has been in operation since 2008.  Demenagement Myette has about 500 customers per year, employs 15 people (during peak season), and uses 4-wheel trailers holding 600 pounds.  Loads include beds, washing machines, armoires – all but pianos.  Since Montreal is densely urban, the average move is less than 2 miles.  Myette notes that driving a truck cost half an hour trying to park. 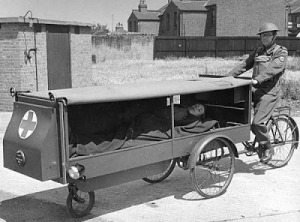 Locally, there was a bread delivery service in the Delaware Ave. area and a compost pickup in Troy.  Anyone knowing of someone operating a bicycle-powered service is encouraged to comment.

Filed under Service by Bicycles