On behalf of people on bicycles (and those who want to be), thank you, the city officials, and the city’s contractors for developing the plans for Madison Avenue Traffic Calming. Your opening words at the July 29 “design meeting” made clear your commitment to the project and the development of a bicycle friendly Albany.

The only sustainable option for bicycle facilities that will get people on bicycles and on the street remains Protected Bicycle Lanes. These lanes on Madison Ave. will propel the City of Albany into the future and hone our competitive edge. Experience of other cities across the USA and the updated Federal design standards support this position.

In resolving the issue of maintenance cost, we urge you to look beyond this immediate cost to what will be the best long term investment through increased business and property values, improved health, reduced traffic and parking congestion, improved safety for all street users, and increased number of people moving (or returning) to Albany. Short term, the City can cover maintenance costs by reallocating DGS services within its current budget. By redirecting cleaning tasks from streets not requiring a 7-day cycle (e.g., many residential streets), we can maintain the new, redesigned Madison Ave.

“Alternative D is the Plan for Me” – Protected (Separated) Bicycle Lanes on Madison Ave.

RE: “Alternative D is the Plan for Me” – Protected (Separated) Bicycle Lanes on Madison Ave.

The City of Albany has presented 5 alternative designs for Madison Ave. The Protected Bicycle Lane Coalition and those who want to ride the streets of Albany need you to weigh in favor of “One-Way Separated Bicycle Lanes – Alternative D.” (Here “separated” means “protected.”)

One-Way Separated Bicycle Lanes – Alternative D is the safest because

Let the Mayor know you’re in support of Alternative D by submitting your comments to MadisonAveStudy@albany-ny.org here before August 15.

Just remember – “Alternative D is the Plan for Me!” 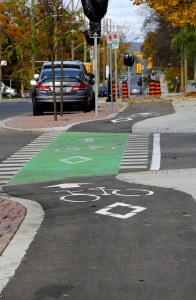 The City of Albany is progressing on Madison Avenue Traffic Calming from South Allen St. to Lark St. The project will reduce the number of travel lanes, while improving bicycle accommodations and completing all work between the existing curbs. Public comments are being solicited, and you are invited to join the City’s design team at this meeting to hear an overview of the project and to provide input on the alternatives.

2. Sign the Protected Bicycle Lanes petition here.  Join the parade of people who demand this change for the City of Albany.

Time is Running Out – Protected Bicycle Lanes Needed in Albany

If we want protected and/or separated bicycle lanes, we need to push for them. Remember, if you are getting this e-mail, it is likely that you are already interested in cycling or in supporting cycling. However, please recall that protected bicycle lanes may not be for YOU but they are for those who want to ride but who are unaware of this campaign.

Please support your desire for progressive bicycle facilities by writing to the mayor (or the addressee you prefer).

Office of the Mayor

If you live, work, or do business in the City of Albany, you should feel more than comfortable writing to the mayor. If not, write to your town supervisor or other official instead.

Author a to-the-point letter on why you want safe protected or separated cycling facilities in the City of Albany. Your request could be in general or specifically for both Madison Ave. AND the link connecting the new Albany County Helderberg-Hudson Rail Trail to the re-built Quay St. protected bicycle lanes at the Albany Corning Preserve.

Use your own arguments or chose from the following Protected Bicycle Lane benefits:

If you want a sample letter to get you started, go here.

If you want to review and use other points, go here.

If you have additional addresses (e.g., town supervisor, Common Council member, NYS Assembly or Senate member, neighborhood association) who you think need to get behind Protected Bicycle Lanes, send then each a similar letter/e-mail.

If you do not feel that protected bicycle lanes are a good fit for part of Albany’s bicycle route system, would you write to support your own ideas for making a better place for people on bicycles? How about: education about on bicycles for people in cars, way finding signage, conventional bicycle lanes, re-engineered roadways and intersections, bike boxes at some intersections, advance green lights for people on bicycles, maintenance of existing bicycle and shared lanes (e.g., Clinton Ave. and Western Ave. in Guilderland), special training for police officers on investigating crashes involving people on bicycles hit by cars, removing pejorative laws that impeded cycling, adding “no bicycles” signage on sidewalks, city-sponsored League of American Bicyclists “smart cycling” classes, or whatever else you think will help.

After you’re done and if you have not done so already, “like” both of these Facebook sites:

This is a sample letter to elected officials asking them to embrace and implement Protected Bicycle Lanes in the City of Albany.

If you live, work, or do business in the City of Albany, you should write to the mayor. If not, write to your town supervisor or other official. Adjust the letter as you see fit. Use your own arguments or chose from these following benefits: Protected Bicycle Lanes shield people on bicycles with a physical barrier; they are the safest, most inviting way to ride; local business benefit from Protected Bicycle Lanes; they are safer for all – 40-50% fewer crashes for people on bicycles, on foot, or in cars; they protect people on bicycles with a physical barrier; and they lower less pollution and wear and tear on streets.

If you want to review and use other points, go here.  (Follow these additional links for info on Protected Bicycle Lanes or on the South End Bikeway Link )

Office of the Mayor

I am writing to ask that you support installation of Protected Bicycle Lanes as part of the Madison Avenue Traffic Calming project and include them in the design of the proposed South End Bikeway Link.

In studying this issue, I am convinced that installation of protected/separated facilities for people on bicycles will be a great benefit to the City of Albany in terms of economics, livability, and safety. Other cities across the US have installed Protected Bicycle Lanes and report that they have paid off handsomely.

Both of the projects cited simply will not reach their potential without your administration’s aggressive action. Madison Ave. can become a major bikeway linking the downtown with many venues on Madison Ave. and, ultimately, out Western Ave. to Guilderland’s bicycle lanes. The street will be safer for all users – without a reduction in parking, drive time, or expense. The South End Bikeway Link linking the new Albany County Helderberg-Hudson Rail Trail to the revamped Albany Corning Preserve “bike way” and the Mohawk-Hudson Bike-Hike Trail/Erie Canalway Trail can only work if there are facilities to help people work their way through this heavily traveled area. In both cases, we have the space and the need.

I hope that you will give these projects you utmost attention.