The Power of the Tandem

I am seriously in awe of the power. The feeling of companionship and trust that comes when two people share an experience together is staggering. It turns boys to men, conservatives to liberals, and non-cyclists into bicycle riders. 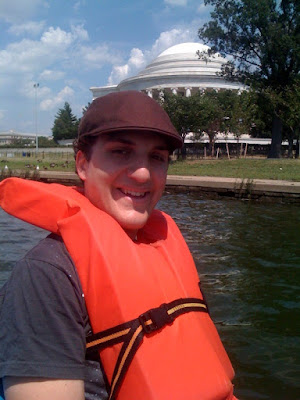 Let me explain, about a week ago I went down to D.C., our nation’s capital, to visit my sister. The thing I most wanted to do down there was ride the paddle boats through the basin. This is something I don’t recommend unless you are a short person because the pedals are way too close for comfort or any sort of efficient paddling.

The next day my sister had a surprise for me. She took me to a bicycle rental place and we rented a tandem bike to ride around the city with. Her in the back and I in the front we did not get more than two feet on our first attempt. After I had explained some of the finer points of bicycling, like you need to push on the pedals to make it go, we were off. 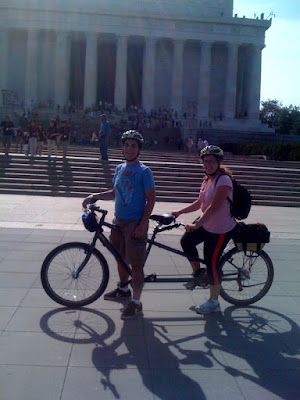 Now, you have to understand something about my sister. She has not ridden a bicycle in a long time; much less in the road. It defiantly took some getting used to, but as we were going she got more and more comfortable. When we were going downhill at twenty miles an hour without pushing on the pedals she took it with a lot more ease then I expected. As an aside, if you are planning to rent a bike make sure it is properly adjusted because the reason we were not pressing on the pedals was not for lack of wanting to go faster. It was because the bike would not shift into its highest gear. So we would just be spinning our wheels. Anyway, we rap up, return the bike, and go on our merry way.

A few days ago I get an IM (instant message) from my sister informing me of her intentions of buying a bicycle to ride to the train station in the mornings and evenings; a commute that used to take here a half an hour to traverse on foot. You have to understand, this is a woman that used to dread the idea of riding a bike due to balancing issues. Now she is coming to me for bicycle recommendations. Well I am happy to report that she purchased here bike and, I hope, having a lot of fun riding it around.

Now that’s the power of a tandem. It turned a woman who had so much trepidation about riding bicycles at first into a bicycle owner, and not just an owner but a commuter. I can’t wait to go down to D.C. again to visit here and go for a ride.